We will send you an email to reset your password.

Designed by the blessed Mother herself, the Miraculous Medal is one of the most recognized and popular devotional items associated with miracles.

Designed and revealed by Mary, the Medal is unique among all medals.

It was almost midnight when St. Catherine Labouré was awakened by a soft voice, whispering, “Sister, sister, sister.” Mysterious events led her to the chapel where the Blessed Mother appeared and sat down near the altar. St. Catherine knelt at her feet, rested her hands in Mary’s lap, looked into her eyes, and had a heart-to-heart conversation with her. Later, St. Catherine would refer to that night as “the sweetest moment of my life.”

Four months later, in November of 1830, Mary again appeared to St. Catherine at the Rue de Bac Chapel. This time, our Blessed Mother was standing on a globe, with dazzling rays of light streaming from her outstretched hands. Framing the apparition was an inscription: “O Mary, conceived without sin, pray for us who have recourse to thee.” When Mary spoke to St. Catherine, she said “Have a medal struck upon this model. Those who wear it will receive great graces, especially if they wear it around the neck. Those who repeat this prayer with devotion will be, in a special manner, under the protection of the Mother of God. Graces will be abundantly bestowed upon those who have confidence.”

With approval of the Catholic Church, the first medals were made in 1832 and distributed in Paris. Only ten of the original medals are known to exist, and one of them is housed at the Miraculous Medal Shrine.

Almost immediately, the blessings that Mary promised showered down on those who wore her medal, and soon all of France was clamoring for what the people referred to as the “Miraculous Medal.” Today, the Medal is still drawing down from God blessings for body and soul.

Symbolism of the Miraculous Medal

The Miraculous Medal was originally called the Medal of the Immaculate Conception, but, because of the numerous accounts of miracles by those who wore it, people began to call it the Miraculous Medal, and the name stuck. The Medal is a visual reminder of our salvation through Jesus Christ.

The front side of the Miraculous Medal depicts Mary Immaculate, her hands open, full of light. St. Catherine Labouré saw Our Lady appear like this and heard her say, “Have a medal made according to this model. Everyone who wears it around their neck will receive great graces.” Mary stands upon the globe as the Queen of Heaven and Earth. Her feet crush the serpent to proclaim that Satan and all his followers are helpless before her (Gn. 3:15). The year 1830 on the Miraculous Medal is the year the Blessed Mother gave the design of the Miraculous Medal to St. Catherine. The reference to “Mary conceived without sin” supports the dogma of the Immaculate Conception of Mary — referring to Mary being sinless, “full of grace,” and “blessed among women” (Lk. 1:28). The dogma of the Immaculate Conception was proclaimed 24 years later in 1854, and then confirmed when Mary appeared to St. Bernadette Soubirous in Lourdes, France, in 1858.

On the reverse side, the Cross and the letter M symbolize the close relationship of Mary to the suffering, passion, and death of her Son. The cross can symbolize Christ and our redemption, with the bar under the cross a sign of the earth and the Altar, for it is on the Altar at Mass that the Sacrifice of Calvary continues to be present in the world today. The M signifies “Mary” and “Mother.” The interweaving of Mary’s initial and the cross shows Mary’s close involvement with Jesus and our world. In this, we see Mary’s part in our salvation and her role as Mother of the Church.

Beneath the Cross, bar, and the M are two hearts side‐by‐side: the Sacred Heart of Jesus crowned with thorns and the Immaculate Heart of Mary pierced by a sword. The two hearts represent the love of Jesus and Mary for us.

The twelve stars signify the twelve tribes of Israel and the twelve apostles, who represent the entire Church as it surrounds Mary. They also recall the vision of Saint John, writer of the Book of Revelation (12:1), in which “a great sign appeared in heaven, a woman clothed with the sun, and the moon under her feet, and on her head a crown of 12 stars.” 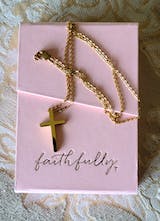 It’s beautiful and the size that I wanted, comes in a very nice box , very happy.